The Hatch and Brood of Time 21: Exit, Pursued by a Bear

Exit, Pursued by a Bear

In the third act of The Winter’s Tale, Antigonus abandons baby Perdita in the wilderness, then promptly flees the stage, “pursued by a bear” (III.iii.64). This enigmatic phrase has become one of the most famous of Shakespeare’s stage directions. Whether or not this direction was carried out with an actual bear, Shakespeare’s cultural and geographical proximity to bear-baiting arenas enabled him to use a bear as a theatrical tool, only once as an actual onstage presence but frequently as a metaphor for power and powerlessness.

It is unsurprising that Shakespeare would have been familiar with the details of bear-baiting, as bear-baiting and other blood sports were closely tied to theater in Elizabethan culture. Philip Henslowe, the manager of the Rose Theater, and his son-in-law, the actor Edward Alleyn, divided their time equally between producing plays and organizing bull- and bear-baiting matches (Raleigh 429). In 1613, Henslowe demolished the main buildings of the Paris Garden and transformed it into a theater called “The Hope”, which they intended to use for both theater productions and blood sports (Raleigh 429). Theaters and bear-baiting arenas often looked very similar. In 1599, Thomas Platter of Basle wrote of the Bear Garden: “the play house is built in circular form; above are a number of seated galleries; the ground space under the open sky is unoccupied” (qtd. in Chambers 456). The Bear Garden and other similar bear-baiting arenas had the same structure as round playhouses like the Globe Theater, which was also located close to popular bear-baiting arenas; though the exact location of the Bear Garden is unknown, a map of London from 1616 shows the Globe next to the “Bear Gardne”.

Both audiences and critics seemed to conjoin theater and bear-baiting. Despite its violent nature, bear- and bull-baiting were considered entertaining, even comedic. Upon observing a show wherein an ape was placed on a horse and the two animals were attacked by dogs, a visiting duke declared that “to see the animal kicking amongst the dogs, with the screams of the ape, beholding the curs hanging from the ears and neck of the pony, is very laughable” (qtd. in Dickey 257). A visitor to celebrations of peace between England and Spain in 1604 described a crowd who “took their places at the windows of the room which looked out upon a square, where a platform was raised, and a vast crowd had assembled to see the King’s bears fight with greyhounds. This afforded great amusement” (qtd. in Dickey 257). The effect of watching these events was likely similar to watching a comedy, or, as Martin Holmes guessed, other theater genres:

“These early tragedies and melodramas are full of declamation, rage, battle and bloodshed, but surprisingly little deliberate cruelty.... In the same way, we may conjecture, men went to watch a baiting, not for any pleasure in seeing an animal tormented, but for the excitement generated by the growling, roaring, barking, shrieking and hortatory yelling that has made the name of the Bear-garden survive as a synonym for unbridled uproar.” (qtd. in Dickey 263)

Of course, blood sports were not always received with praise. Critics of bull- and bear-baiting made the same claims as critics of the theater. Thomas Brasbridge questioned whether “daily running to plays, interludes, and bearbaiting” had provoked God to send the plague to London; Humphrey Roberts condemned bear-baiting because it brought about “swearing, blasphemy, brawling, and chiding” and kept audience members from attending church (Ringler 408; 401). Perhaps the most significant difference between the playhouses and the baiting amphitheaters was that playhouses required much more money to remain in operation, whereas bear gardens could survive with a smaller audience and income; their admission prices, however, were the same (Brownstein 247; Dickey 261).

If The Winter’s Tale used a real bear, Shakespeare would have taken it from one of these arenas. There was some precedent for this, as other living animals were occasionally used in Shakespeare’s plays. In The Two Gentlemen of Verona, Lance brought his dog, Crab, to the stage; in Titus Andronicus, a clown entered “with a basket, and two pigeons in it” (Shakespeare III.iii; qtd. in L.B. Wright 661). Other playwrights of the time used trained animals; Jonson’s play Every Man Out of His Humour required a dog and a cat, and Middleton’s The Roaring Girl called for ducks and several dogs to perform tricks onstage (L.B. Wright 665). Though there is no record of living bears playing a part in any Elizabethan play, it was possible to train them. Bears were used in other kinds of performances, including some jugglers’ acts, and in 1579-80 bearwards presented an act alongside stage actors (L.B. Wright 658). It would not have taken an inconceivable jump to begin incorporating these animals into the plays themselves.

The other possibility is, of course, that the bear in The Winter’s Tale was portrayed by a human actor in a bear costume. In other Elizabethan plays in which bears appeared onstage, this was almost certainly how it was accomplished. In Henslowe’s diary, he logged the purchase of “lyone skin” and “beares skin” for a production of Phaethon, a lost play (qtd. in Steggle 65). Could these have been the costumes actors wore to appear like lions and bears onstage? A play called Mucedorus provides some hints that its bear must have been played by a human. In a scene added to the play in 1610, a clown enters, and “As he goes backwards the Beare comes in, and he tumbles ouer her, and runnes away”—an instruction clearly difficult to carry out with a real bear (qtd. in Biggins 4). Mouse’s speech in this scene also implies that the bear is played by a human actor: “A Beare? nay, sure it cannot be a Beare, but some Diuell in a Beares Doublet: for a Beare could neuer haue had that agilitie to haue frighted me” (qtd. in Biggins 4).

Though the bear that chases Antigonus in The Winter’s Tale is the only bear to appear onstage in any of Shakespeare’s works, his plays are full of more subtle references to the practice of bear-baiting. Macbeth, shaken by the arrival of Macduff’s army, declares that “bear like, I must fight the course” (Shakespeare, Macbeth V.vii.1-2); similarly, in King Lear, tied to a chair by Cornwall and Regan, Gloucester “must stand the course” against the cruelty of Lear’s “dog-hearted daughters (qtd. in Dickey 265). 3 Henry VI’s Richard, Duke of Gloucester celebrates his father’s victories:

Methought he bore him in the thickest troop

As doth a lion in a herd of neat,

Or as a bear, encompass'd round with dogs,

Who having pinch'd a few and made them cry,

The rest stand all aloof and bark at him.

So far'd our father with his enemies,

So fled his enemies my warlike father (qtd. in Dickey 256).

The scene that Richard describes was not an uncommon sight at bear-baiting arenas. The bear, tied to a stake, would often manage to injure or kill the fastest of the dogs. The other dogs would then retreat to the edge of the pit and bark at the bear (Dickey 255). Shakespeare recognized in the bears both power and powerlessness; Macbeth and Gloucester both align themselves with the bear’s inability to escape and thus its powerlessness under humans’ control, while Richard’s father is aligned with its ability to scare away the dogs and thus its power over foes.

With the possible exception of the bear in The Winter’s Tale—whose appearance is comedic only because it is unexpected—the bears mentioned in Shakespeare’s plays are usually not used for comedic purposes. Neither Macbeth and Gloucester’s expressions of confinement nor Richard’s declaration of bravery align with audiences’ experiences of watching “laughable” bear-baiting shows with “great amusement.” Though Shakespeare’s knowledge of the culture of bear-baiting must have informed his use of bears as metaphors, the portrayal of captured bears in his plays surpasses the cultural understanding of bear-baiting shows and lends importance to the experience of the animal itself. 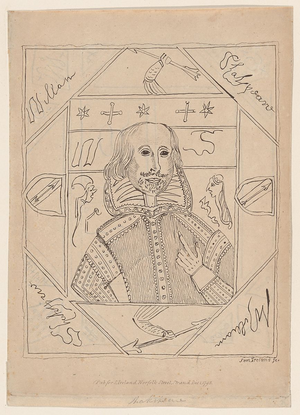 
The Hatch and Brood of Time 14: William Henry Ireland’s Forgeries


The Hatch and Brood of Time 13: Inviting the Devil to the Stage 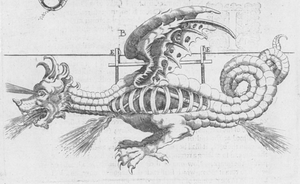