The Hatch and Brood of Time 13: Inviting the Devil to the Stage

Inviting the Devil to the Stage

In Act III Scene 3 of The Tempest, Ariel appears like a harpy, clasps a banquet table with his wings, and vanishes it, accompanied by thunder and lightning. How was it possible for actors to perform this trick onstage? Stage directions give no hints, apart from the note that Ariel uses “a quaint device” (Shakespeare, The Tempest 3.3.69).  In scenes like this, where plays required actors to perform actions that seemed impossible, Elizabethan theaters relied on a variety of stage tricks as spectacular as they were dangerous. Although they were popular, these tricks terrified superstitious audiences, some of whom believed that mimicking magic in the theater was as damning as performing real magic.

The easiest way that Elizabethan actors created stage illusions was through sound. Behind the stage was a tiring-house, a backstage area like a dressing room. Among other purposes, this backstage area was used to create offstage sounds necessary for the scene. For example, the lark heard by Romeo and Juliet in Act III Scene V of Romeo and Juliet could have been created by what the stage directions of John Fletcher’s The Pilgrim called “Pot birds”, or devices with which actors could produce the sound of birdsong by playing a pipe through water in a clay pot (Barclay and Lindley 27). In some plays, actors fired cannons and pistols to create sound effects backstage (Gurr 115). The sound of thunder, including that heard upon Ariel’s entrance, was created by rolling a cannon across a plank or, as an eyewitness account of a production of Faustus noted in 1620, playing drums in the tiring-house (qtd. in Barclay and Lindley 27). In some theaters, this was probably paired with water that fell from the theater roof (Gurr 122).

Lighting is not typically thought of as an important part of Elizabethan theater. Outdoor playhouses like the Globe were open to the sky, so lighting depended upon the time of day and the weather. Smaller indoor theaters used candles for lighting. For the most part, audiences only knew if a scene took place in daytime or nighttime if it was written into the dialogue. However, some lighting was central to the plot of certain scenes. As well as dialogue or stage directions that called for candles and torches, the common note “Thunder and lightning” required actors to find a method of creating lightning. For this they used “squibs”, a kind of explosive consisting of a tube of gunpowder (Gurr 122). Some theaters used bigger forms of explosives. John Marston’s The Fawn (1605) describes the effect of two kinds of fireworks, “squibs” and “Gallants”:

“PAGE. There be squibs sir, which squibs running upon lines like some of our gawdie Gallants sir, keepe a smother sir, with flushing and flashing, and in the end sir, they do sir, --

The use of fireworks was particularly common in outdoor, public theaters, where fireworks could be grander than they could in indoor, private theaters and the Globe; the intense smell of the fireworks made them difficult to handle in indoor environments.

Other stage tricks allowed actors to perform seemingly supernatural feats. A trapdoor above the stage, nicknamed “heaven”, allowed some characters, like Jupiter in Shakespeare’s Cymbeline, to fly in from the ceiling (Gurr 125). Another trapdoor, called “hell”, allowed them to exit into the floor. It is possible, though not certain, that the lower trapdoor was used for invisibility tricks; medieval performers sometimes disappeared using a puff of smoke and a trapdoor, but it is possible that this trick was used only for religious performances and never extended to plays (Palmer 120). If the lower trapdoor was not used for this purpose, invisibility could be achieved with what Philip Henslowe called “a robe for to goo invisibell” -- a cloak likely made in a color that would blend in with the background of the stage (Palmer 124).

To a modern audience, some of these stage tricks would seem unconvincing. However, belief in witches, demons, and magic was common, and the imagery of witchcraft created onstage resonated with audiences. In a superstitious time, some of the tricks used by stage actors were not only convincing enough to engage viewers, but to convince them that actual supernatural or demonic events were occurring. In a Puritan attack on theater and actors written in 1633, William Prynne recalled hearing about a theatergoer who saw “the visible apparition of th Devill on the Stage ... in Queene Elizabeths dayes, (to the great amazement both of the Actors and Spectators) whiles they were there prophanely playing the History of Faustus” (Prynne 556). Prynne’s claim could be discounted as a method of scaring away actors and audiences from the theater, but it was not the only claim made by people who thought they saw the devil appear during performances, and not all of these stories were told by critics of the theater. On the last page of a sixteenth-century book, one C.G.R. wrote that he had heard the story of actors in Doctor Faustus seeing “one devil too many amongst them” during a scene, rushing out of the theater, and spending the rest of the night praying (qtd. in Guenther 46); John Aubrey claimed that Edward Alleyn, an actor at the Fortune Theater, was frightened by “an apparition of the devil” in the middle of a play (Aubrey 18). Each of the account is second hand, and Prynne’s story does not specify how the “amazement” of the actors could be differentiated from the acted “amazement” of their characters, but they nevertheless convey a fear that the special effects used by actors brought about real supernatural consequences. The play about which these accounts were written would be staged differently in private and public theaters, but would invariably require some spectacle; in 1620 a Faustus audience member recalled seeing “shagg-hayr’d Devills runne roaring over the Stage with Squibs in their mouthes, while Drummers make Thunder in the Tyring-house, and the twelve-penny Hirelings make artificiall Lightning in their Heavens” (qtd. in Barclay and Lindley 27). The staging of the scene was realistic enough to terrify people involved in more than one production -- the superstition that productions of Doctor Faustus summoned real demons was rooted in the fear that an imitation of magic had strayed too close to the real thing.

While it was unlikely that a real devil would appear onstage to frighten actors and audience members, Elizabethan theatergoers were wise to fear the illusions of magic that they saw onstage. The late 16th century was already a dangerous time to go to the theater; frequent outbreaks of the Bubonic Plague required theaters to close several times during Shakespeare’s lifetime. Dangerous special effects introduced a new level of risk. In 1613, a misfired cannon shot during a production of Henry VIII started a fire that burned down the Globe Theater. There is no record of the number of casualties (perhaps, incredibly, there were none), but the potential for injury in a burning, crowded theater was immense. Maybe the audience members and actors who were afraid of real magic being performed onstage should have been more afraid of magic being performed incorrectly, leading to dangerous consequences.

At the end of A Midsummer Night’s Dream, the trickster Puck reassures the audience that the events that they observed did not actually happen, but were illusions: “no more yielding but a dream” (Shakespeare, A Midsummer… 5.1.445). As well as suggesting that the play’s author should be pardoned for any offense his audience may have taken from his words and begging for their applause, Puck’s farewell assuages any fears that the audience had that the magical acts shown were real. Modern audiences do not need this disclaimer; their assumption is that magic has no power outside of the limits of the story. But to Elizabethan audiences, who saw witches in storms and demons in fireworks, reassurance that supernatural manipulation of people’s lives was nothing more than stage magic would grant them genuine relief. 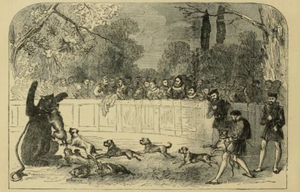 
The Hatch and Brood of Time 21: Exit, Pursued by a Bear


When Rape was Legal: The Politics of African American Women's Bodies During the Reconstruction Era 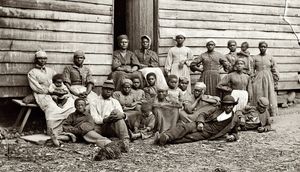